Playback Theatre re-enacts real stories from the audience. Its ritual structure, and guided facilitation creates a safe space for people to meet each other through telling real stories around mental health issues.

By bringing together people who are both affected by these issues and those who may be ignorant and prejudiced, playback theatre creates a powerful forum for generating empathy and understanding through witness and sharing of real stories. 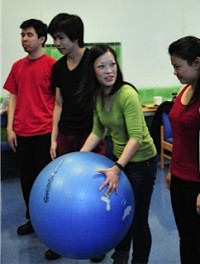 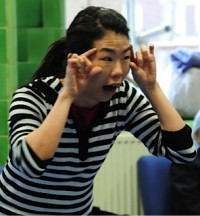 We began with a workshop to create a sense of ease and playfulness across the generations.

Then followed a performance of Playback Theatre

where many stories were told of isolation, misunderstanding, depression,

particularly in the early days of arriving in London as a new immigrant.

stories of support and recovery.

There is still very little understanding and acceptance of mental issues amongst members of the Chinese community. 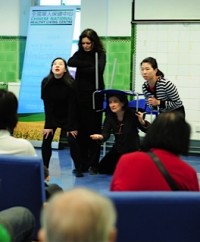 This afternoon was an opportunity for young and old, across generations, to witness and some to talk openly and share candidly about their experiences of emotional and mental instability – as well as having these feelings collectively acknowledged and normalised.

This event was conducted in English and Cantonese.