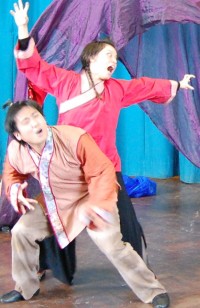 Chinese Festivals in a Flash! was a Theatre-in-Education (TIE) touring project which aimed to strengthen mother-tongue learning in supplementary schools 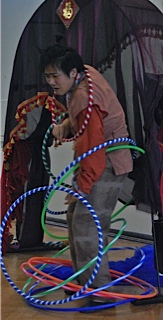 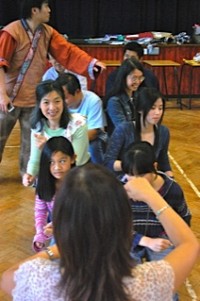 and reached over 200 students, teachers and parents.

Funded by Trust for London & the Paul Hamlyn Foundation

The script from the pilot tour was revised to incorporate new artistic and educational ideas. 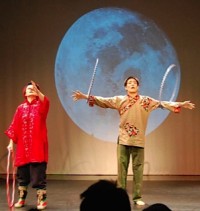 Over 1400 students from 12 Chinese Supplementary schools participated in this project.

“The feedback from the students was great.  Nearly 100% agreed the performance was fantastic: lively and fun.  Moreover, it was useful and helpful for teachers and students to understand the festivals’ meaning, history and customs through the drama.”  Wing Sun Pang, London Harrow Chinese School

Each event consisted of a performance followed by a workshop with selected participants, demonstrating action methods supporting language learning and appreciation of culture and customs. 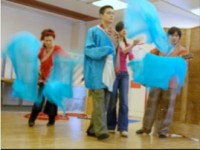 Students, Parents and Teachers have increased their interest in Chinese festivals and Family Relationships as a result of the performances which inspired them and reinforced their knowledge of Chinese festivals, history and customs. Flora Man, Haringey Chinese School

Touring mainstream schools in the UK 2010-

‘I just wanted to say how much the children (and staff) at Yealmpstone Farm Primary enjoyed the show by True Heart Theatre Company this morning.  They were so good I am going to recommend them to my colleagues across the U.K.  Thanks for the opportunity of seeing their show.’ Jill Bailey, International Development Officer, Services for Children & Young People, Plymouth City Council

It was performed to over 800 students and teachers followed by post-show workshops which were enjoyed by over 480 students.

‘Thank you so much for your fantastic performance this afternoon.  The children really enjoyed it and learnt so much.  It is so important for children like ours to experience and encounter people from other ethnic backgrounds so that they learn to value and enjoy difference and diversity.  Thank you for helping to make that a reality this afternoon.’ Kayti Selbie, Chaddlewood Primary School, Plymouth